Ware & Rice: A Case of Beauty and the Beast 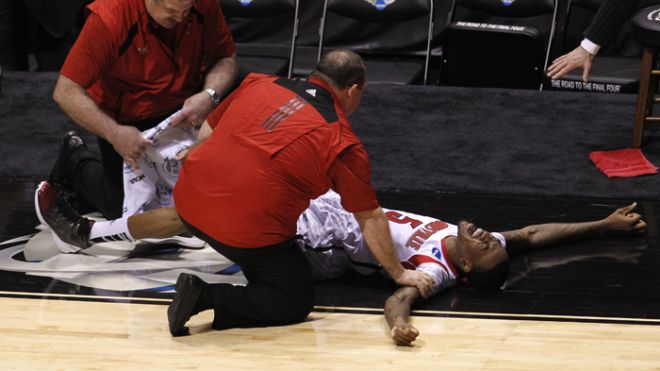 What a week of extremes this has been in college basketball.

Twenty year-old guard, Kevin Ware, had one of the most horrific injuries ever witnessed, when he broke his tibia in two places, during a crucial game with Duke. With his leg snapped almost completely in half and bone protruding six inches, Kevin’s coach and teammates were frozen in shock at what they just witnessed. Yet, Kevin then shows the selflessness and maturity to tell his team and coach to forget about him and “just go win the game.”

A few days later, videos are released showing forty-one year old Rutgers Coach Mike Rice having melt downs and temper tantrums with his players during practices. Rice is seen shoving, grabbing and throwing balls at players at close range, as well as using gay slurs to apparently insult them into playing better.  Of course, the code for players is not to blow the whistle on their coach, because that shows weakness and their scholarship could even be threatened.

Between Rice and Ware, we see a marked contrast in emotional control, maturity and judgment during crucial times. Ware is in control, while Rice is clearly not.To say that Rice needs to learn anger management is a ridiculous understatement, yet he was given the job despite apparently behaving this way in previous coaching positions.

Of course, the big losers in this scenario are the Rutgers players themselves, who are now in limbo, awaiting a new coaching staff and probably a new learning curve for the playing style of that staff.  And who can measure the hit that the victims of Rice’s abuse took to their self-esteem?

Coaches who use intimidation and insults to motivate their players are committing a fraud to the families of those players whom they recruited.  How many parents would have allowed their sons to sign with coaches if they owed up to their abusive tactics and showed videos of those tactics in action, when they made their home visits?  How many talented players fall by the wayside because they will not tolerate such treatment, so they quit, often dropping out of school because they cannot afford to continue without a scholarship, and ending their dreams of a professional career?

This mode of coaching would never survive in the NBA, where the players have all of the power, so coaches like Rice cannot use the excuse that they are preparing their charges for the rigors of professional basketball with such tactics.

It’s time that we blow the whistle on coaches who do not have the maturity to control their emotions. We need to quickly weed them out. All coaches should take a lesson from a twenty year-old, named Kevin Ware, and put their teams ahead of their self-serving egos.

Dr. Jack is a frequent guest on CNN, MSNBC, FOX SPORTS and countless radio talk shows across the U.S. and Canada. He is the author of “The Teacher’s Ultimate Stress Mastery Guide,” and several series of hypnotic audio programs, some specifically for athletes and some for anyone wanting to raise their self-confidence and esteem.

In his speaking presentations, Dr Jack teaches sales and financial services professionals the exact same skills he teaches to elite and world champion athletes to Develop & Maintain the Mindset of a Champion!

To learn more about Dr. Singer’s speaking and consulting services, please visit DrJackSinger.com and FunSpeaker.com or call him in the U.S. at (800) 497-9880.